How Social Media is Changing Journalism (and Tradeshows)

Last month I watched a fascinating movie called the Bang Bang Club, which chronicles the lives of four photojournalists in South Africa. The group, which included Pulitzer Prize winners Greg Marinovich and Kevin Carter, conducted a series of high-risk photo shoots portraying the violence and civil unrest that marked the Apartheid era. The Bang Bang Club risked their lives entering urban areas with heavy gunfire to capture photos of the violence for the local and international press. In 1994, two of the photojournalists were injured from crossfire during one of their shoots.  One of the photographers died while the other was hospitalized, but recovered.

It was around the same time, in the early 1990s, that live coverage of the war in Iraq came to television screens around the world. One of the key catalysts to CNN’s growth was the coverage it provided from Baghdad during the Gulf War. I remember sitting in my college dorm room watching CNN reporters such as Peter Arnett and John Holliman who were on the ground in Iraq. When video could not be streamed Bernard Shaw relayed news received via audio transmissions. CNN had negotiated a special agreement with the Iraqi government which allowed for a permanent audio connection that continued uninterrupted during the bombings. At the time the idea of live coverage of political and military events was revolutionary.

In the past few months there have been numerous uprisings in the Middle East and North Africa. Starting in December 2010 a series of protests and demonstrations commonly known as the Arab Spring occurred in countries ranging from Bahrain and Yemen to Morrocco and Algeria. Revolutions occurred in Tunisia and Egypt. However, the way information has been shared during these most recent events greatly differs from the Gulf War or Apartheid battles of the early 1990s. Today, some of the best information is being generated not by the BBC or CNN, but by citizen journalists who are participating in the uprisings. Not only are social platforms being used to organize protests, but they are being leveraged to report the results. One Egyptian activist tweeted during the protests, “We use Facebook to schedule the protests, Twitter to coordinate, and YouTube to tell the world“. 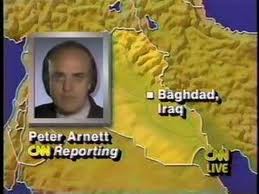 The Arab Spring news coverage is just one of many examples of how social media has significantly changed the role and activities of journalists.  I should point out that the two, citizen and professional journalists, are not competing.   A more accurate way of stating this is that the professional news organizations are able to augment their coverage of political events with contributions from amateur sources.   Professional journalists are benefiting from a real-time feed of news, photos and videos delivered over the Internet.  In the future, as the reliability of citizen journalism improves reporters may not need to risk their lives to report live from war zones.

Of course, a similar trend is occurring in technology and business journalism as well.  Prolonged recessions and lower advertising revenues are forcing publications to find more innovative ways to capture the news. For example, tech and business journalists no longer need to fly around the world to attend trade shows.  And incidents such as the Icelandic volcano (Eyjafjallajökull) eruption that disrupted trans-Atlantic travel for several weeks have driven the more cautious travelers to reconsider the need for live attendance.  Much of the information can be gathered simply by monitoring live streaming videos, microblogging services and photo- sharing sites.

You might think that the ability for users to gain the benefits of attending a conference without paying the registration fees would be a negative for the tradeshow business.   However, I think the event business is actually benefiting from the emergence of social media. Because people can engage in real-time conversations during and after the event, it is drawing interest back to tradeshow participation and sponsorship.

These are just a few examples of how social media is revolutionizing functions such as journalism and tradeshows.  What is perhaps most interesting is that rather than displacing these functions social tools are being used to enhance the content and experience for end-users.