Newspapers are the only Industry Sector run worse than the Automakers

As I mentioned in my posts earlier this month, the news media is really the biggest obstacle to GM’s success, not the debt holders or the unions.

The media has been relentlessly bashing GM with negative front page headlines for almost two decades now.  Newspaper writers across the country have criticized GM for failing to react to changing market conditions with innovative new products; failing to create enough value to attract financing from private capital sources; and failing to overcome its challenges with labor unions and infrastructure overcapacity.  My response to this is “Hello? Newspaper editors– look in the mirror!”  If there is any industry that is run more poorly that the US automotive sector has been in recent years it is the newspaper business!

There is a great article on Wikipedia that summarizes many of the challenges experienced by newspapers in the US during the past few years.  Consider the following examples:

The situation in the industry has progressively worsened to the point that a bill was introduced to the US Senate entitled the Newspaper Revitalization Act introduced, which would allow newspapers to restructure as non-profit corporations and to enjoy significant tax breaks. 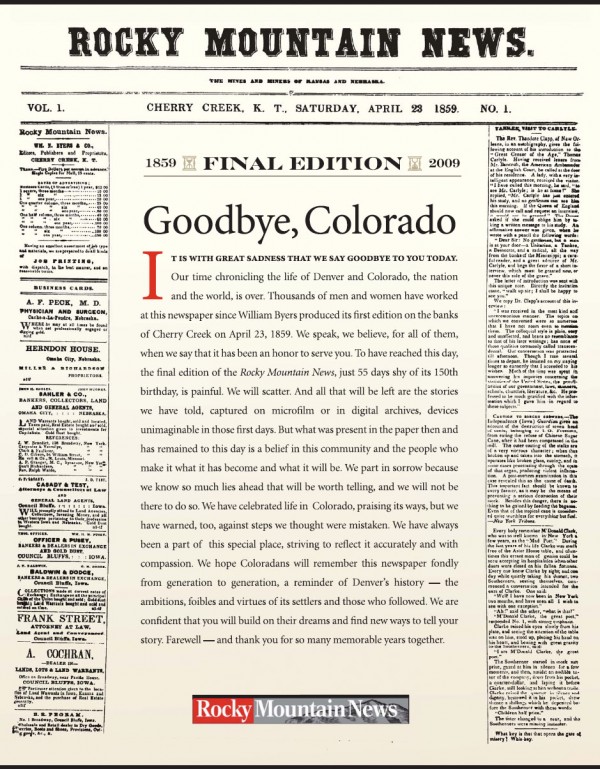 The root cause of the industry’s collapse has been the advent of the Internet.  In about 10 years, the web has been able to capture significant market share of both advertising and readership from the subscriber base newspapers took hundreds of years to build.  Another irony of the newspaper industry’s struggles is that their product, information, could not be more in demand.  Consumers, investors and businesses alike are all seeking ways to find more information in faster time frames.  Despite the surge in demand, the owners of media conglomerates and smaller papers have been unable to transform their business models to capitalize on the opportunity.  With the exception of the Wall Street Journal, almost all the national newspapers in the US have resorted to giving away their on-line content for free.  And there is little evidence to suggest that the online forums are generating an adequate return from advertising revenues.

Think about it.  Imagine if you opened up your newspaper every morning to read about how millions of people across the country were canceling home delivery of their local papers to instead get the same information for free from the TV or Internet.  Would this encourage you to subscribe to a second paper?  Would this encourage you to renew your subscription when the time comes?

I wonder why fewer people are buying cars these days when they are constantly bombarded with stories about:

Car manufacturers and dealers – It is time to wise up and stop funding your biggest opponents!

There are a few lessons that marketing professionals can learn from the newspaper industry:

← Why does GM invest so much money in the Media Titans who have damaged its Reputation?
Cloud Computing and Batman →